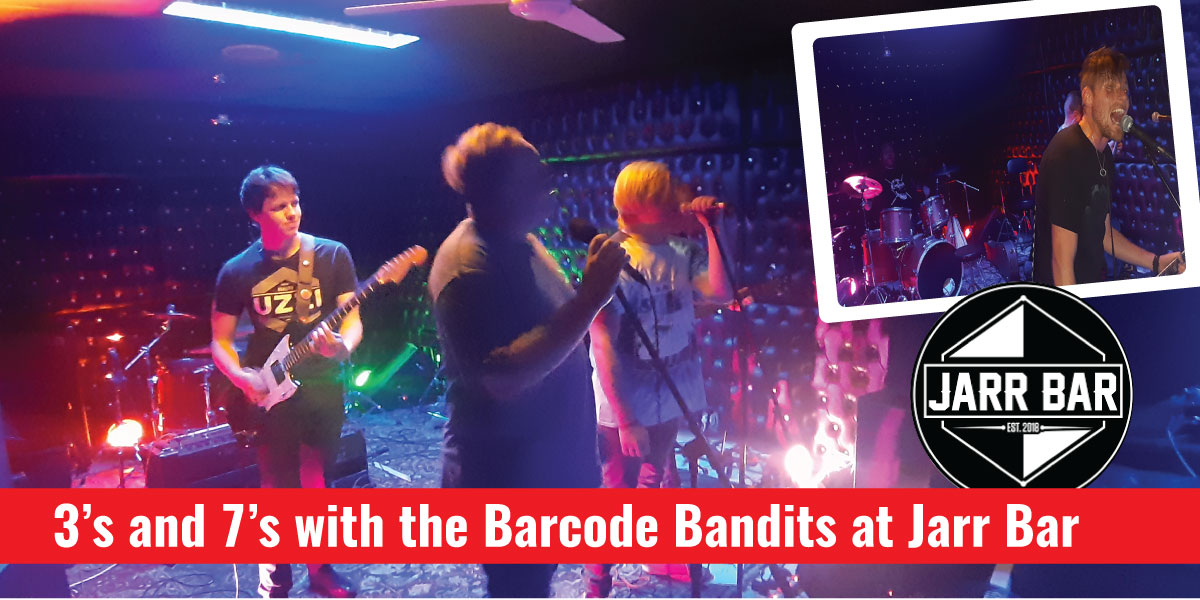 Written by Stephanus Dreyer
Uploaded by
We were fortunate to go and view two awesome bands in November at Jarr Bar an awesome venue in Silverton, Pretoria. The Barcode Bandits is no stranger to RockingSa, so we were delighted when they suggested that we go and have a look at 3’s and 7’s the band that is performing with them.

Each band member bring something unique to the table and you can see it from 3’s and 7’s covering songs from their favorite bands like Nirvana, Foo Fighters, Queen, Aerosmith, Led Zeppelin to name a few to their original songs that give of a Jack Black Band vibe.

3’s and 7’s stage presence is mesmerizing as you can’t help but to sing along with cool covers like “Blur song 2” and “Under Pressure of Queen”. 3’s and 7’s is not just another cool cover band they have a collection of original songs list and they entertained us with “Stars” and “Free Entities” that is very catchy songs you can’t help but to move your body to their lively tunes.

RockingSA loved the catchy lyrics of 3’s and 7’s song “Free Entities” that make you listen closely and relating to what this song is about.  You can’t help but sing along to the the words we are free entities.

The Barcode Bandits was up next with Marc Barclay (Drums) and Ryan Zimbler (Lead Vocals and Guitarist) joined on stage by Neil Hammelton on Bass as they entertained us some of their classic songs like “Shut your Mouth” featured on their first EP, “Bandits” and “Red”. The Barcode Bandits isn’t another one track band as they work on new material all the time.

There newest songs are “Our world” and “Save our Souls”. RockingSA have shared there video of “Save our Souls” on RockingSA News Facebook Page and was nostalgic to hear it live for the first time at Jarr Bar. This is no ordinary song it is about stopping violence against woman. You can’t help but to relate to the lyrics of this song of the escalating violence against woman. The barcode bandits are invested in this cause and you can’t help but to join in and sing along with the lyrics of “Save Our Souls”. For more on the barcode bandits go and have a look at The Rise of The Barcode Bandits - http://www.rockingsa.com/content/page/en_US/04c0c06b-fd0f-11e8-864c-448a5bd883d8/0.html