The Action Thrillers are Pretoria-based and started out in 2007 as nothing but two guys jamming together. They began practicing and a few months later they played in front of 5000 people at the KFC Battle of the Bands. They quickly recruited a drummer and bassist to be able to play the gig. The sound at the event was awful and combined with the relative inexperience, it was quite the nightmare. Still, the songs and performance were great. They made it to second place.

The Action Thrillers then continued to play gigs but by 2010 it was clear that there was a general confusion about where the band was going and what sound they wanted to have. The constellation of the band changed and in 2011 the story continued! The Thrillers now happily consist of Hendrik (vocals, rhythm guitar and song writing), Gareth (lead guitar), Chris (bass) and Christo (drums).

The short and semi-sweet version of Hendrik’s musical past starts with some choir experiences as a kid, but soon he was told that “singing is for gays” and to rather try sports. Growing up in the Vaal, the choice of “manly” sports was clear, but even looking at him now, it would take some serious squinting and colourful fantasy to imagine Hendrik playing rugby. Other attempts at running around on fields and courts were equally unsuccessful, so it came as a nice break when he accidentally stumbled into a musical audition in high school and immediately got one of the lead roles. Many years later he spent two years in London, to be “where the best come from”. A large chunk of the time was spent at open mic nights. London brought new musical influences to the until then limited choice of Queen, Korn and Elvis. An own sound developed and when Hendrik got back to Pretoria in 2007, he was ready to turn the one-man project into something bigger.

Gareth is the newest member of the crew, having joined the Action Thrillers in mid-2012. Born in Durban, but grown up in Pretoria, he already started playing the guitar at age 10. When he was 16, he watched one of his dad’s Toto DVDs. What would have turned other people away from music, made him decide to dedicate his life to his passion. After high school, he took lessons with a top South African guitarist and since 2007 he has been teaching music and played for various bands. His influences are the technique of Steve Lukather (guitarist of Toto), the emotion-filled blues of John Mayer and T-bone Walker and the progressive thinking of Incubus. The Action Thrillers combine all of these elements and made him decide to join.

Next up is Chris. Hendrik met Chris at a music store and they joined forces for open mic nights. Chris’ attitude to music is that there is no limit to it and that people shouldn’t restrict themselves with genres. You kind of have to have this outlook to have his musical history: it ranges from acoustic to metal to the soul/funk outfit Menage A Trois. Chris joined the Action Thrillers, because he felt something in the songs that he could relate to and saw the opportunity to try himself out, since the music is influenced by many different bands and genres. He seems to have found his place in music with the bass, even though it wasn’t even his first choice. Unfortunately, the drum kit was a bit too much for his parents’ ears and living space. That’s lucky for us though, because Chris wrote all the bass lines for the Action Thrillers songs and adds a fantastic depth to them.

Christo is from lovely Boksburg, studied jazz music and played in numerous bands during his studies. His influences are mainly soul, blues and jazz. Although music seems a pretty safe way to rely on a steady income, he is currently studying drafting as a Plan B…but everyone knows that Christo will become world famous anyway, so let’s just disregard that. He decided to join the Action Thrillers because of the unique sound and the instant connection with the other members. The attitudes toward music meshed well and Christo’s craziness fit in perfectly.

Every Action Thrillers concert is like a movie. Characters, story, soundtrack. Semi-insane perfectionism with a shot of creative chaos produce a show that gets worked on for months into the last detail. The album will be equally as epic. Hendrik describes the theme as a Quentin Tarrantino movie shot in space. The image is that of a raw wasteland. Solid guitar tracks and synth beats set the scene. They create a world unknown and yet the music seems to come from a very familiar place. Songs that you can sing and dance to.

The songs are all based on Hendrik’s life and have been written over 10 years. The topics range from the South African political system, over materialism, to lots of heartache. Never whiny, always strong. Somewhere in there we can all find ourselves. 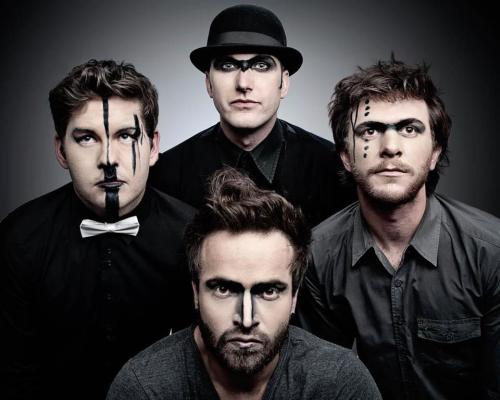